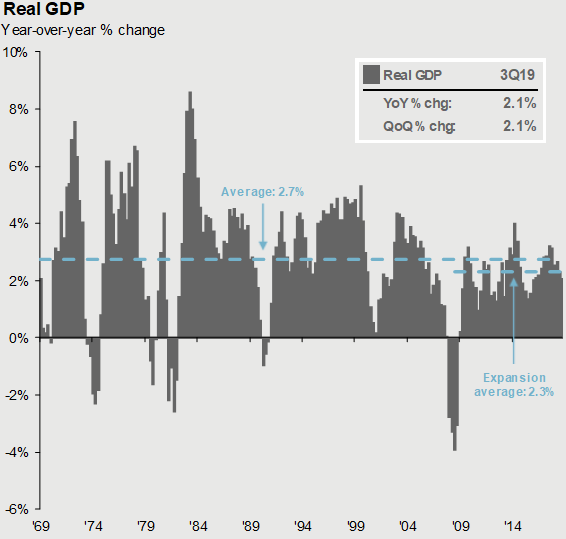 2019 turned out to be a good year for the U.S. economy and an excellent year for investment returns. While economic growth slowed over the year, unemployment remained closed to a 50-year low and inflation stayed low and steady. Declining interest rates led to surprisingly positive bond market returns, while stocks bounced back strongly from their slump at the end of 2018.

Looking forward, while the global economy remains weak, the U.S. is still more likely to see slow growth than recession. Current valuations and economic fundamentals suggest lower investment returns going forward. Moreover, political forces in the U.S. and around the world are limiting economic growth and increasing risks for investors. While we try to steer clear of the political debate, it is becoming a much larger discussion point as we move into the election year. It is undeniable that political choices will have an impact on future investment returns. Given the uncertainty that surrounds these choices, investors should continue to employ a diversified strategy. We believe that any such strategy should start with a broad understanding of today’s investing environment, which is of course the fundamental goal of our quarterly updates.

For much of the last year, we have been forecasting a moderation in economic growth. Third quarter Gross Domestic Product (GDP) confirmed that this slowdown is now here, with real GDP growth downshifting to 2.0% year over year, compared to 3.2% a year ago. Early evidence from the fourth quarter suggests a continuation of roughly 2.0% year over year growth into 2020. In broad terms, this slowdown reflects weakness in business investment spending, exports and inventory accumulation, all of which to some extent have been triggered by heightened trade tensions. Consumer spending should begin to grow more slowly as the effects of the 2017 tax cuts fade. That said, barring a major shock, we expect the economy to avoid recession and sustain slow growth into 2020. There are a few reasons for this judgment. For starters, none of the cyclical sectors of the economy, such as autos, housing, business investment spending or inventories appear to be over extended, nor does there appear to be any particularly dangerous area of financial excess. Without a boom, it’s hard to generate a bust! Additionally, despite a very tight labor market and stable inflation, the Federal Reserve is now in easing mode and long-term interest rates remain very low. Normally this late into an expansion, high interest rates would be curtailing both business investment and home buying. This is not the case today. 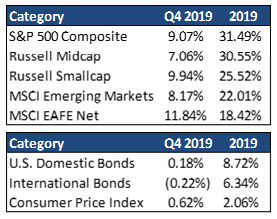 Domestic equities continued their upward trend in Q4, as the S&P finished up 9.07% during the fourth quarter. Profit growth was extremely strong in 2018, however, slowed considerably in 2019. Operating earnings per share fell in the third quarter of 2019. We expect profits to have rebounded in the fourth quarter, but only achieve low single digit growth in 2020, as margins continue to come under pressure.

International equity returns rebounded in Q4 of 2019, with developed markets and emerging markets up 8.17% and  11.84% for the quarter. The pace of the global expansion has slowed over the past 18 months. Among developed countries, Europe continues to limp along after political turmoil in France and Italy and manufacturing weakness in Germany. The Eurozone, Japan, Korea and Taiwan have also been caught in the  trade tension crossfire between the U.S. and China, causing a fall in global  trade. A general China slowdown has had a ripple effect on developed and emerging economies. With this said, December saw progress in trade, with an agreement to ratify and replace NAFTA and a phase one trade agreement to reduce tariffs between the U.S. and China. This increases the chance of a modest economic rebound in growth in 2020. In the long run, slowing growth in the U.S. and a rising trade deficit, could cause the dollar to fall, amplifying the return in international equities. Emerging market stocks have the most favorable long-term growth prospects and should experience some relief in the wake of the recent cut in short-term U.S. interest rates. Broad valuations measures suggest that international stocks are simply cheaper, relative to U.S. stocks and their own long-term history. Proper balance between U.S. and International equities remains a prudent investment decision that we will continue to monitor.

2019 was a stellar year for fixed income investors, with U.S. bonds returning 8.72% and international bond returns of 6.34% YTD. Although the labor market is still very tight and inflation pressures are muted, the Federal Reserve cut rates three times in 2019, characterizing it as a “mid-cycle adjustment.” The FOMC noted that “the current stance of monetary policy is appropriate to support sustained expansion of economic activity,” suggesting it intends to remain on pause over the medium term. It also acknowledged that muted inflationary pressures and global developments—a nod to ongoing trade tensions—will be closely monitored going forward. Looking forward, the bar remains high for the Fed to adjust interest rates in either direction at least through 2020.

Long-term interest rates remain very low, especially compared to historical averages. Rates across the curve fell dramatically over the summer, but rebounded slightly in the autumn. Still, in this low rate environment, investors continue to hunt for yield. However, higher yield often means higher risk, and often a greater correlation to equities. Investors ought to weigh whether they are being compensated adequately for owning some areas of the market that offer higher yields. Investors should also consider moving up in quality and longer in duration to protect their portfolios.

At the start of 2020, it is now more than 11 years since the global financial crises, which precipitated a bear market in equities around the world and the biggest global recession since the great depression. While both financial markets and economies have both fully recovered from this trauma, it has in retrospect fostered more extreme political forces. These forces in turn are shaping the investment environment in unpredictable ways and inducing a more cautious attitude among investors. This is as it should be, as investors need to maintain balance to be prepared for the next downturn, whenever it occurs.