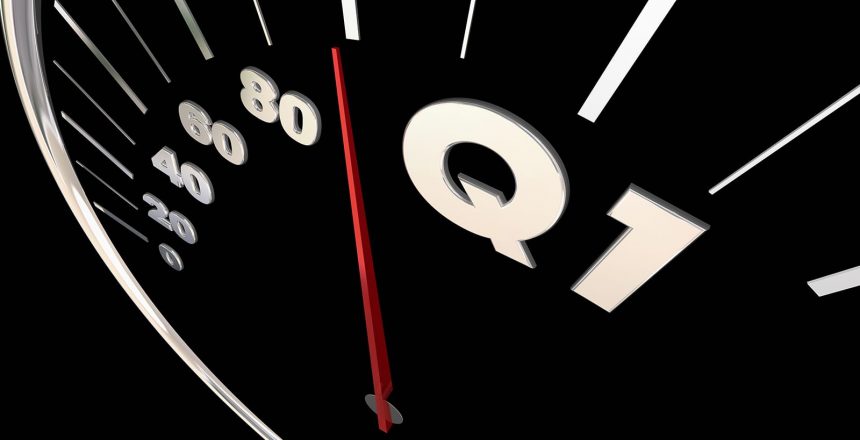 Following a challenging 2020 and a rocky start to 2021, there is finally light at the end of the tunnel.  As we enter the second quarter, the economic landscape is dominated by two surges: a fiscal surge and a vaccination surge.  On the fiscal front, the $1.9 trillion American Rescue Plan is estimated to provide $1.2 trillion in additional spending in the economy in just the next 6 months.  Most of the money is going to low and middle-income households who have a greater propensity to spend which should further stimulate the economy.  On the vaccine front, the United States has made considerable progress in its rollout efforts, with total administered doses climbing to over 100 million and rising at a pace of close to 3 million doses a day.  The U.S. rollout is paving a way to end the social distancing recession and the reopening of service sector businesses, factors that are very likely to lead to a powerful pickup in Gross Domestic Product (GDP) growth in the second quarter and later in 2021. 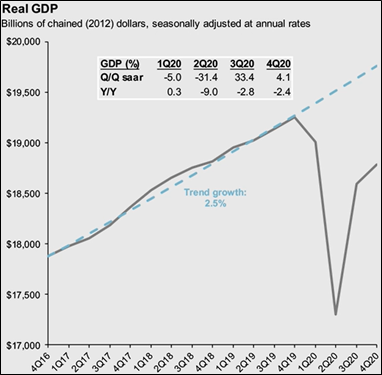 As was the case in 2020, the course of the pandemic should dictate the course for the expansion in 2021.  Following the collapse in the second quarter of 2020, economic growth surged in the third quarter and ended the year with a moderate rise in the fourth quarter.  Despite this initial strong surge, economic activity has only partially recovered from the collapse and remains far below the previously projected GDP growth.  This reflects on the many sectors of the economy that could not fully reopen during the pandemic including travel, leisure, entertainment, and restaurants.  The retreating pandemic, coupled with new fiscal support, are priming the economy for a surge over the course of 2021.  Growth will be driven by pent up supply and demand in those sectors that have been most impacted by the pandemic.  We expect these to reopen quickly, leading to high single digit economic growth in the second half of 2021 and carrying over into 2022.  This should push the economy closer to a full recovery and growth thereafter may well retreat closer to the roughly 2% it saw in 2019 at the end of the last long economic expansion.

While we have many things to look forward to in 2021, there is a looming fear on a rational investor’s mind. Of the projected federal budget in 2021 ($6.9T), about 50% is expected to come from borrowing ($3.4T).  This excludes the cost of the Build Back Better infrastructure plan, which is projected to cost roughly $3T if passed, increasing the budget to $9.9T in 2021.  This would increase government borrowing to $6.4T, or 65% of the budget.  These numbers suggest that the government will hit a new record high debt to GDP ratio by the end of 2021, even higher than the aftermath of WWII.  If the government fails to rein in spending over the next few years, we could see significant problems, including inflation, higher interest rates and higher taxes, ultimately setting the stage for an economic relapse.  These potential problems should be considered when managing an investor’s portfolio in the years ahead. 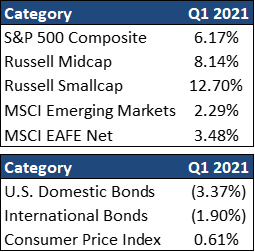 Domestic equities were positive during the first quarter of 2021, with the S&P 500 finishing +6.17% for the quarter.  U.S. equities have recovered significantly from the March of 2020 low, and at record speed. However, as markets look through the virus and the downturn to the recovery, valuations are well above historical averages. Investors should recognize that earnings are likely to continue to grow quickly in the year ahead which should lead to some compression in these ratios. Moreover, a continuation of relatively low interest rates likely justifies some elevation of valuation measures above their historical averages. Still, rich valuations may constrain equity returns over the long-term. Consequently, investors will want to diversify their equity exposure, ensuring they are holding value stocks as well as potentially reducing weightings to the very largest companies in the stock market.  While growth has outperformed in recent years and, most notably, during the pandemic in 2020, value may do better over the next year or two. Even after a good start to 2021, value appears to remain cheap relative to growth compared to long-term averages. Earnings in value sectors also appear more likely to rise in the robust economic recovery that we expect for the next year.

International stocks also saw gains in Q1, with developed country and emerging stocks up +3.48% and +2.29% respectively.  Investors should evaluate their holdings of international equities relative to their overall portfolio. East Asia appears to have had more success in subduing Covid-19 than the United States, while progress in Europe in resolving the Brexit standoff and increasing fiscal integration could benefit the region.  In addition, both Emerging Market and Developed Country stocks outside the United States are selling at some of their cheapest levels relative to their U.S. counterparts in the last 20 years. This, along with the potential for a strong global post-pandemic economic rebound, lower trade tensions and the prospect of a lower dollar in the long run all argue for a meaningful allocation to international equities with a particular focus on East Asia and Europe.

As a result of rising interest rates due to inflation fears, U.S. bonds struggled during the first quarter, finishing -3.37%.  In the first half of 2020, the Federal Reserve took strong action to support the economy including cutting the federal funds rate to a range of 0-0.25%, opening or expanding a very wide range of facilities designed to support different parts of the bond market and adding dramatically to its balance sheet.  In addition, in August, the Fed adopted an “Average Inflation Targeting” strategy, by which they will aim to achieve inflation of above 2% for some time to make up for years of undershooting this target.  In order to achieve this target, they have pledged to hold the federal funds rate at its current 0-0.25% target range until inflation is at 2% and on track to moderately exceed 2% for some time.

Although the Fed pledged to maintain its current asset purchases until “substantial further progress” has been made to achieving its inflation and employment goals, it is important to note that this timetable suggests that the Fed will reduce its bond purchases well in advance of any increase in short-term interest rates.  This, in turn, suggests a steepening of the yield curve as the economy continues to recover in 2021.

This quarter should be quite telling regarding our collective success in ending the pandemic, as well as the pace and shape of the U.S. and global recoveries from the social distancing recession. Given the uncertainties investors continue to face, it would be wise to maintain a somewhat defensive and diversified stance, taking advantage of active management as we impatiently approach the end of the pandemic.