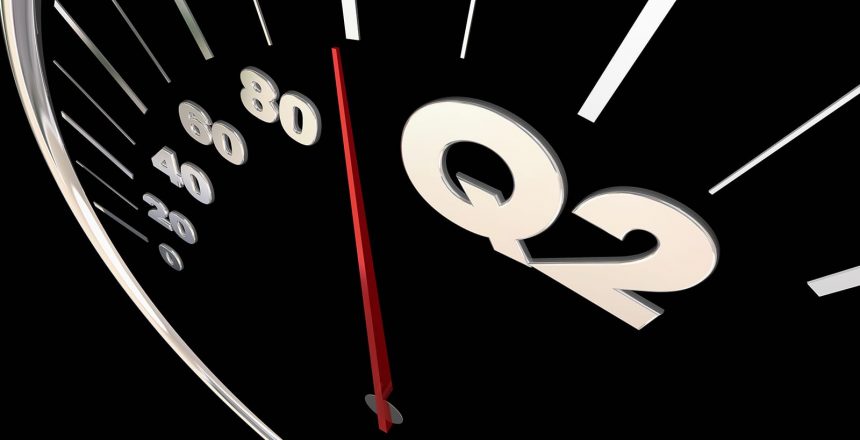 Following a very challenging 2020 and a rocky start to 2021, the U.S. economy is surging, powered by a fading of the pandemic and massive fiscal stimulus.  As we enter the third quarter, U.S. vaccinations have increased significantly, with over 50% of the country having received at least one does of the vaccine.  Equity markets have rallied, and home prices have surged, with household net worth rising over 17% since the end of 2019.  At the same time, fiscal stimulus geared towards low- and middle-income households has put more cash in the hands of those consumers most likely to spend it.  These factors have allowed the sectors most adversely affected by the pandemic to show strong improvement, contributing to a powerful pickup in Gross Domestic Product (GDP) growth that should push the U.S. past pre-pandemic output levels before the end of the year.  Blockbuster consumer spending on goods, a resurgence of spending on services and rebounding investment spending could push the economy to a full GDP recovery by this quarter. We expect growth to then fade over the course of the expansion, returning to the roughly 2% pace it saw at the end of the last long economic cycle.

While the recovery in the labor market thus far is encouraging, an elevated unemployment rate suggests it is still far from complete. Reports from businesses suggest that labor demand is exceptionally high as businesses grapple to keep up with pent-up consumer demand.  Prolonged enhanced unemployment benefits, lingering pandemic worries, childcare responsibilities, and early retirements have likely restrained labor supply. With surging labor demand and a higher cost of low-wage labor due to enhanced unemployment benefits, employers have had to raise wages to lure people back to work.  This is critically important for the Federal Reserve, as higher wages could lead to inflation that is less temporary than the Fed currently expects. 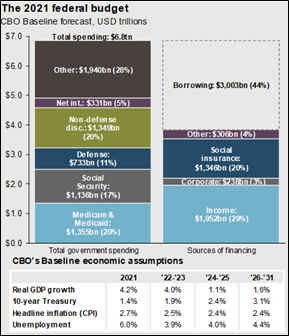 Inflation signals have heated up significantly as a surge in consumer spending collided with supply shortages across major sectors of the economy. Meanwhile, the Fed has been consistent in their message that they regard near-term spikes in inflation as transitory. However, after years of dormant inflation, a powerful economic rebound coupled with rising wages could put the Fed’s new framework to the test.  At its June meeting, the Fed delivered meaningful upgrades to its forward guidance by way of its updated growth and inflation projections. Along with its more optimistic outlook on the economy, the committee has also shifted to a slightly more hawkish stance. The Fed is now projecting two rate hikes in 2023, up from no rate hikes expected in the March meeting.  Additionally, the Fed is now discussing a timetable for tapering its bond purchases.

The federal government is on track to hit a new record high debt-to-GDP ratio by the end of 2021.  The $1.9 trillion American Rescue Plan is still working itself through the system and will continue to support the economy through the end of the year and into 2022. Washington has also proposed $4.2 trillion in additional spending, largely aimed at infrastructure, childcare, and education. Investors should recognize that if the government fails to rein in deficits and debt monetization as the economy accelerates in a post-pandemic world, the risk of a boom-bust recession will grow. In particular, a sharp rise in inflation could result in higher interest rates, ultimately setting the stage for a possible economic relapse. 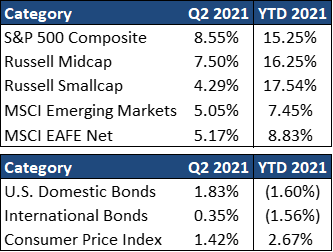 Domestic equities were positive during the second quarter of 2021, with the S&P 500 finishing +8.55% for the quarter and +15.25% YTD.  U.S. equities have trended higher during the first half of the year, characterized by expanded valuations and rising earnings estimates. Stock prices based on current forward P/E ratios still look elevated, although they have come in somewhat as earnings have played catch-up. Earnings are likely to continue to grow quickly in the remainder of the year, which could lead to further compression in these ratios. Relatively low interest rates likely justify some elevation of valuation measures above their historical averages. However, higher inflation, potential corporate tax hikes, and wage pressures will likely put further pressure on equity valuations within the next few years.  After multiple years of strong outperformance of growth stocks, most notably during the pandemic in 2020, value has begun to recover. Even after a good start to 2021, value appears to remain cheap relative to growth compared to long-term averages. Additionally, value generally tends to outperform growth during periods of above-trend economic activity and rising interest rates.

While the expected synchronized global recovery has been delayed, it has not been derailed, and vaccination progress is now gaining speed globally. Europe has seen a substantial improvement in vaccinations and upcoming fiscal support from the EU Fiscal Recovery Fund should benefit the region.  In addition, both emerging market and developed market stocks are at some of their cheapest levels relative to the U.S. in the last 20 years. This, along with a powerful global post-pandemic economic rebound, lower trade tensions, and the prospect of a lower dollar in the long run all argue for a greater allocation to international equities, with a particular focus on East Asia and Europe.

U.S. bonds rebounded from their early struggles during the first quarter, finishing +1.85% for the quarter, while remaining -1,60% YTD.  In the first half of 2020, the Federal Reserve took strong action to support the economy including cutting the federal funds rate to a range of 0-0.25%, opening or expanding a very wide range of facilities designed to support different parts of the bond market and adding dramatically to its balance sheet.  In addition, in August of 2020, the Fed adopted an “Average Inflation Targeting” strategy, by which they will aim to achieve inflation of above 2% for some time to make up for years of undershooting this target.  In order to achieve this target, they have pledged to hold the federal funds rate at its current 0-0.25% target range until inflation is at 2% and on track to moderately exceed 2% for some time.

For fixed income investors, the challenge this year has been in finding yield with the 10-year treasury hovering around 1.5%.  Against the backdrop of rising inflation, interest rates will likely move higher at some point, putting further temporary pressures on bond investors.  Additionally, other factors may also be contributing to the suppression of long-term interest rates such as the compression of credit spreads due to Fed support of this part of the bond market, portfolio rebalancing into long-term bonds and a temporary lull in the supply of treasuries.

Bond markets, like all other market segments, will experience pressure periodically where the returns are not consistent with their long-term history.  Understanding this, there continues to be a place in portfolios for fixed income as it provides diversification and protection in the case of an equity market pullback or economic relapse.

The U.S. economy is looking healthy as we enter the third quarter, and continued progress on the pandemic at home and abroad will be vital in keeping the pace of the global economic recovery. Given the substantial progress markets have made in recovery, investors would be wise to focus on fundamentals and maintain a somewhat diversified stance as we enter a new era in the post-pandemic world.