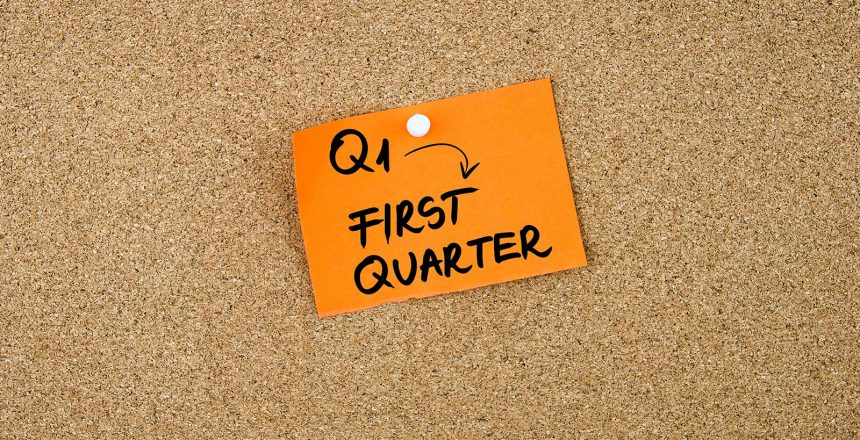 Entering the second quarter of 2022, the impact of COVID-19 on the global markets is beginning to fade. However, in its place investors face new challenges including the implications of Russia’s brutal invasion of Ukraine, stubbornly high inflation and a new, more hawkish stance adopted by the Federal Reserve. As the investment environment evolved in the early months of 2022, equity markets saw a sharp correction with the S&P 500 falling 13% by early March. By late March, U.S. stocks had recovered most of their losses. In contrast, bond yields rose steadily in the first quarter with the 10-year treasury yield rising close to 2.5% by the end of March compared to a yield of 1.51% at the start of the year. 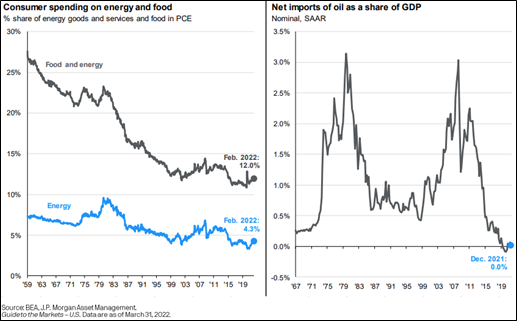 While the financial market implications of Russia’s invasion of Ukraine pale in comparison to the suffering of the people of Ukraine, it will still have substantial effects. For the U.S., the most significant impact is higher energy prices as Russia is a major global supplier of oil and natural gas. However, while higher energy prices could slow the European economy, they should have a less impactful effect on the U.S. In part, this is because the energy portion of household budgets has been declining for years and, by February of 2022, accounted for just over 4% of U.S. consumer spending.  In addition, the growth in U.S. shale oil in recent years means that the U.S. is now essentially self-sufficient in oil. In the 1970’s, when oil prices spiked, American consumers got poorer and foreign oil producers got richer with close to 3% of GDP being devoted to buying foreign oil. Today, when oil prices spike, U.S. producers get richer, allowing purchasing power to stay within the United States.

We expect strong growth in the second quarter spurred by robust consumer and business spending. Thereafter, growth should fade as the economy reaches capacity limits, primarily due to a shortage of workers and as fiscal and monetary policy turn more restrictive. By the fourth quarter of 2022, we expect real GDP growth of 3% or less on a year-over-year basis, with growth slowing further to a roughly 2% pace in 2023.

The labor market has continued to improve rapidly with the unemployment rate falling to 3.8% in February 2022 compared to 6.2% one year earlier. Even with this, there is a massive excess demand for labor with the latest data showing roughly 5 million more job openings than unemployed workers. This excess demand, combined with rising wages, fading pandemic effects on labor supply and the elimination of most pandemic assistance from the government should lead to further declines in the unemployment rate. Indeed it is possible that by the end of this year the unemployment rate will have fallen below 3.4%, making it the lowest unemployment rate since 1953. 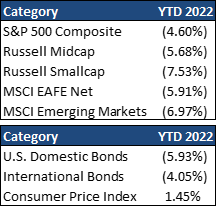 U.S. equity valuations fell back significantly in early 2022, retreating -4.60% for the quarter. This partly reflects a stock market correction due to the impact of Russia’s invasion of Ukraine and the Fed’s more hawkish tilt. It also, however, reflects improved earnings expectations as a strong fourth-quarter earnings season lifted expectations for the year ahead. As 2022 proceeds, slower economic growth, higher wage costs and higher interest rates should slow the growth in profits to single digits. This points to the need for a more selective approach to U.S. equities as investors reassess their strategies for a post-pandemic world.

Early in 2022, value stocks began to recover relative to growth stocks and a combination of high commodity prices and rising interest rates should boost the chances of a long-overdue rotation from growth back to value. Moreover, value stocks remain at historically cheap levels relative to growth stocks and provide substantially higher dividends. This suggests that investors looking for income and wishing to maintain portfolio diversification may want to consider adding to their value allocations if not already included.

While Omicron and the Russian invasion of Ukraine has hindered the global economic recovery in early 2022, it is likely to continue, powered by post-pandemic reopening and more active fiscal policy in Europe. We expect the global economy to continue to grow at a faster-than-trend rate over the next two years and for robust earnings growth to be an important catalyst for international markets. In addition, valuations remain attractive with both emerging market and developed market stocks at some of their cheapest levels relative to the U.S. in the last 20 years. This, along with lower trade tensions and the prospect of a lower dollar in the long run, argue for a healthy allocation to international equities.

High inflation, falling unemployment and the Fed’s much more hawkish stance led to a sharp backup in bond yields in the first quarter of 2022 with U.S. and international bonds retreating -5.93% and -4.05% respectively. A rapidly improving labor market and persistent inflationary pressures has pushed the Federal Reserve to adopt a much more aggressive stance. At its March meeting the Federal Reserve increased the federal funds rate by 0.25% and signaled an intention to raise rates at each of the remaining six meetings in 2022. They also indicated that they would announce a plan at their May meeting to begin to reduce their huge bond holdings. This reduction should boost long-term interest rates and contribute to some softening in home-building and capital spending in 2023.

While there continues to be a place in portfolios for fixed income to provide diversification and protection in the case of an equity market or economic relapse, it should be noted that long-term Treasury yields remain negative in real terms and because of lower default risk, U.S. credit spreads remain tight by historical standards. This suggests that 2022 will continue to be a challenging year for fixed income investors, although higher yields and a moderation in economic forecasts by the end of the year may portend a better 2023.

For many Americans, 2022 has begun in a troubling and disappointing way with the Omicron variant prolonging the pandemic, rising inflation, and the shock of Russia’s brutal invasion of Ukraine. This, combined with a still very partisan political environment, has driven consumer sentiment down to its lowest level in over a decade.

When investors feel gloomy and worried about the outlook, their natural tendency is to sell risk assets in general and stocks in particular. However, history suggests that trying to time markets in this way is a mistake. On average, buying at a confidence peak has yielded a return of 4.4% while buying at a trough has returned 24.5%.  In planning for 2022 and beyond, investors should focus on what they own and valuations rather than when to buy and sell and how they feel about the world.

If you are a client of our firm, we created your portfolio to withstand times such as these.  If you are not a client and have not stress tested and designed a plan to navigate through uncertain times, perhaps now is the time to do so.  We stand ready and available to assist you