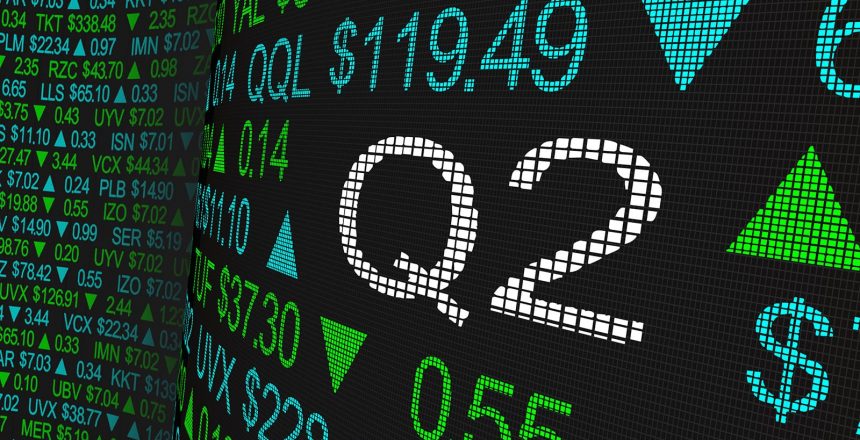 The economic expansion has entered its 11th year in July, making it the longest expansion since 1900. This economic expansion has been like a healthy tortoise – slow but steady. We anticipate that growth will decelerate further and resume its expansion average pace of roughly 2%.  Consumer consumption comprises 70% of Gross Domestic Product (GDP) and appears resilient for the second quarter, but business fixed investment has weakened, and stronger net exports and a build-up in inventories that bolstered 1Q growth is likely to fade throughout the year. One good thing that comes from slow and steady growth is this; without a boom, it’s hard to generate a bust!

The Federal Reserve seems to be on pause and a rate hike in 2019 seems to be off the table. The next move is more likely to be a rate cut, as signaled by Fed Chair Jerome Powell.  If this is the case, then this tightening cycle ended with interest rates at much lower levels than what has been typical in long economic expansions.  The Fed is considering this due to the lack of inflation and the slow economic growth of the current cycle.  Keeping interest rates lower for longer should continue to support business investment and economic activity. 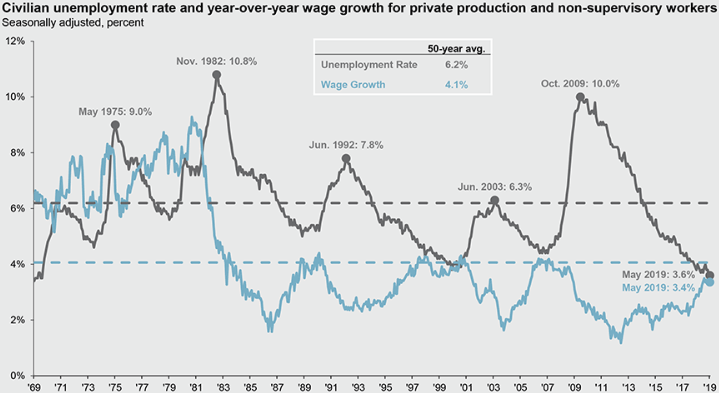 Economic growth creates job growth, with its strongest impact lagging by one or two quarters. Because of this, labor market tightening will continue as payroll employment slows, but less rapidly. The demographic drag of retiring baby boomers combined with tighter restrictions on immigration will limit future job force growth, which will naturally lead to lower levels of GDP growth. With the unemployment rate at 3.6%, we are likely to see the unemployment rate hit its lowest level since the early 1950’s.  Given the current lack of available workers, it is somewhat surprising that companies have been able to hold wage growth to 3.4% year over year.

As a result of the 2018 tax cuts benefits trailing off, we have seen corporate profit growth drop to 4% year over year. We would expect this single digit level of profit growth to be sustained throughout 2019, while not turning negative due to controlled wage growth and low interest rates.

Domestic equities saw a continued rebound in Q2, as the S&P finished up 4.30% during the second quarter. Market volatility in the fourth quarter of 2018 brought equity valuations closer to their long-run averages; however, equity markets have moved higher this year and have achieved new market highs. Although valuations do not appear to be overextended, they are not cheap either. While the market may have room to run, it is important investors be positioned appropriately.  This includes taking appropriate amounts of risk, which may lead to lowering expectations of future portfolio returns.

Turning to International equity, returns were also positive in Q2 of 2019, with developed markets and emerging markets up 3.68% and 0.61% for the quarter respectively. International returns did not keep up with U.S. returns due to the strengthening dollar and investors continued caution on a potential trade war.  Amid global trade tensions that have intensified this spring and remain unresolved, along with political turmoil across Europe and a slowing China, the global economy is facing a slowdown. We have seen manufacturing activity, as measured by PMI data, dip into contractionary territory (below 50) in many regions, most notably China, Germany, the Euro Area, Taiwan and Korea. Services PMI, which has held up better than manufacturing, is also beginning to deteriorate. Still, the global economy is not likely to stall in 2019 and potential reduction of interest rates by the Federal Reserve may relieve some pressure on emerging markets.  In the long run, slowing growth in the U.S. and a rising trade deficit, could cause the dollar to fall, amplifying the return in international equities.  Proper balance between U.S. and International equities remains a prudent investment decision that we will continue to monitor.

2019 is turning out to be much better for fixed income investors than previous years, as U.S. bonds have returned nearly 6.0% thus far, while international bonds are up 5.3%. Although the labor market is strong and growth has been solid, concerns about slowing growth ahead and negative impacts from the ongoing trade tensions between the U.S. and China have global central banks considering easing measures. The Federal Reserve is likely to cut rates at least once, but possibly multiple times, in 2019 as economic conditions deteriorate. Although the labor market is strong, growth prospects are in question and inflation remains subdued. The Fed has abandoned “patience” and “will act as appropriate to sustain the expansion.” Consequently, we expect one, possibly two, rate cuts in 2019 of 0.25%.

With all of this said, it is important to remember that long-term interest rates remain very low, especially compared to historical averages. Investors enjoyed a long bull market in bonds after rates peaked in the early 1980s, resulting in very low yields that were brought down further by extensive quantitative easing and rate cuts. Even though rates have been on the rise for several years, a more dovish Fed could bring rates lower from here. Therefore, in this rate environment and at this stage in the economic cycle, flexibility in fixed income investing will become increasingly important.

Looking ahead, without any fresh tax cuts and with the dragging effect of trade uncertainty, overall GDP growth is expected to slide back to roughly 2%. The issue with a continued slowdown in global growth is the uncertainty of whether it ends in a soft landing or in a recession.  Although there is always the possibility of a recession, it seems that the probability of a soft landing has increased over the last few months.  If the Federal Reserve indeed cuts rates as suggested, we would expect to see continued growth of this bull market.

Overall, we are confident in our positioning and in our investment process, both of which allow us to look past periods of uncertainty (like we saw at the end of 2018) and keep our focus where it should be, which is prudently managing our diversified portfolios to achieve solid long-term, risk adjusted returns. Please do not hesitate to reach out to our team of professionals should you have any questions or concerns about your portfolio.  We continue to stand ready to assist you with your financial planning and investment management needs.