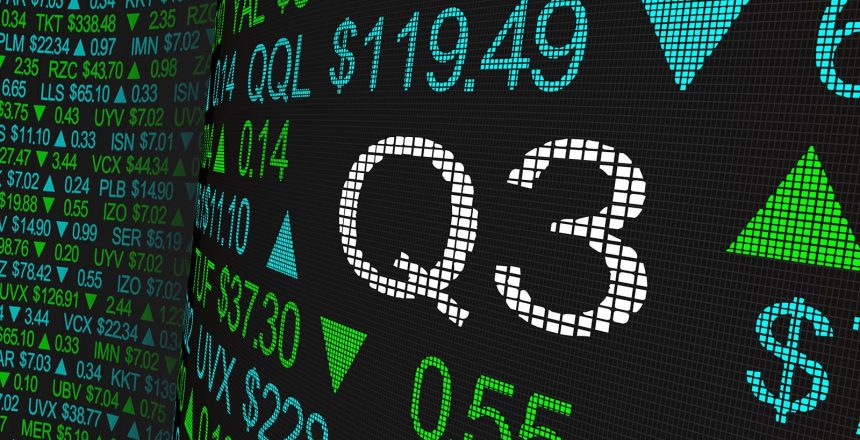 2019 thus far has been a good year for both the U.S. economy and investment returns. While economic growth has slowed, unemployment remains close to a 50-year low and inflation is slow and steady. Declining interest rates have led to positive bond market returns, while stocks have bounced back strongly from their slump at the end of 2018. 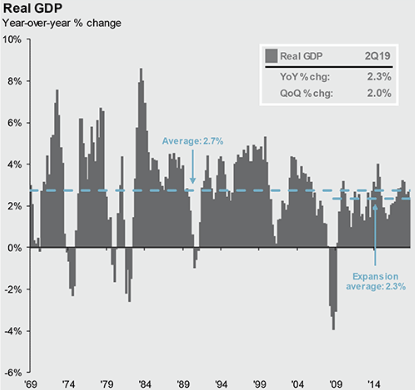 Looking forward, while the global economy is weak, the U.S. is still more likely to see slow growth than recession. Current valuations and economic fundamentals suggest lower market returns going forward. Moreover, political forces in the U.S. and around the world are limiting economic growth and increasing risk for investors. While we try to steer clear of the political debate, it is becoming a much larger discussion point as we move into the election year. It is undeniable that political choices will have an impact on future investment returns. Given the uncertainty that surrounds these choices, investors should continue to employ a diversified strategy. We believe that any such strategy should start with a broad understanding of today’s investing environment, which is of course the fundamental goal of our quarterly updates.

For much of the last year, we have been forecasting a moderation in economic growth. Second quarter Gross Domestic Product (GDP) confirmed that this has occurred, with real GDP growth downshifting to 2.3% year over year, compared to 3.2% a year ago. Early evidence from the third quarter suggests a further slowing to roughly 2.0% year over year. In broad terms, this slowdown reflects weakness in business investment spending, exports and inventory accumulation, all of which to some extent have been triggered by heightened trade tensions. Consumer spending should begin to grow more slowly as the effects of the 2017 tax cuts fade. That said, barring a major shock, we expect the economy to avoid recession and sustain slow growth into 2020. There are a few reasons for this judgment. For starters, none of the cyclical sectors of the economy, such as autos, housing, business investment spending or inventories appear to be over extended, nor does there appear to be any particularly dangerous area of financial excess. Without a boom, it’s hard to generate a bust! Additionally, despite a very tight labor market and stable inflation, the Federal Reserve is now in easing mode and long-term interest rates remain very low. Normally this late into an expansion, high interest rates would be curtailing both business investment and home buying. This is not the case today.

Domestic equities slowed their upward trend in Q3, as the S&P finished up 1.70% during the third

quarter. Profit growth was extremely strong in 2018, but slowed considerably in the final quarter, rising just 4% year-over-year after three quarters of 25%+ year-over-year growth. 3Q19 growth was relatively steady from the previous quarter at 4%, despite initial pessimistic analyst expectations. From here, earnings growth should continue to achieve low to mid-single digit growth for the rest of the year, thus limiting investor returns.

International equity returns saw a pullback in Q3 of 2019, with developed markets and emerging markets down -1.07% and -4.25% for the quarter. Amid global trade tensions that have intensified this spring and remain unresolved, along with political turmoil across Europe and slowing growth in China, the global economy is facing a slowdown. We have seen manufacturing activity, as measured by PMI data, dip into contractionary territory (below 50) in many regions, most notably China, Germany, the Euro Area, Taiwan and Korea. Services PMI, which has held up better than manufacturing, is also beginning to deteriorate. Still, the global economy is not likely to stall in 2019. Additionally, global central banks have shifted towards easing monetary policy, which is supportive to the global economy. In the long run, slowing growth in the U.S. and a rising trade deficit, could cause the dollar to fall, amplifying the return in international equities. Proper balance between U.S. and International equities remains a prudent investment decision that we will continue to monitor.

2019 continues to be a stellar year for fixed income investors, with U.S. bonds returning 8.52% and international bond returns of 6.57% YTD. The Federal Reserve’s shift to monetary easing has led to declines in long-term interest rates, including some brief periods of a negatively sloped yield curve. We do not feel that the yield curve inversion will be as clear of a recession signal as it has been in the past, as the yield curve itself has been distorted by unprecedented central bank buying of long-term bonds. Additionally, we are not convinced that an inverted yield curve would harm the economy and may even boost demand by pushing up consumer income from short-term accounts, while limiting the rise in mortgage rates. Within the bond market, core fixed income plays a critical role in a properly diversified portfolio. While there may still be opportunities in higher yielding sectors, investors should consider moving up in quality and longer in duration to protect their portfolios.

Although the labor market is still very tight, concerns about slowing global growth, negative impacts from the ongoing trade tensions between the U.S. and China, and muted inflation pressures have global central banks back on the path of easing monetary policy. The Federal Reserve has cut rates twice in 2019, characterizing it as a “mid-cycle adjustment.” However, the Fed has not clearly signaled whether there will be more cuts, leaving the door open to further rate cuts in 2019.

As 2019 enters its last lap, it is now more than 10 years since the global financial crises, which precipitated a bear market in equities around the world and the biggest global recession since the great depression. While both financial markets and economies have both fully recovered from this trauma, it has in retrospect fostered more extreme political forces. These forces in turn are shaping the investment environment in unpredictable ways and inducing a more cautious attitude among investors. This is as it should be, as investors need to maintain balance to be prepared for the next downturn, whenever it occurs.