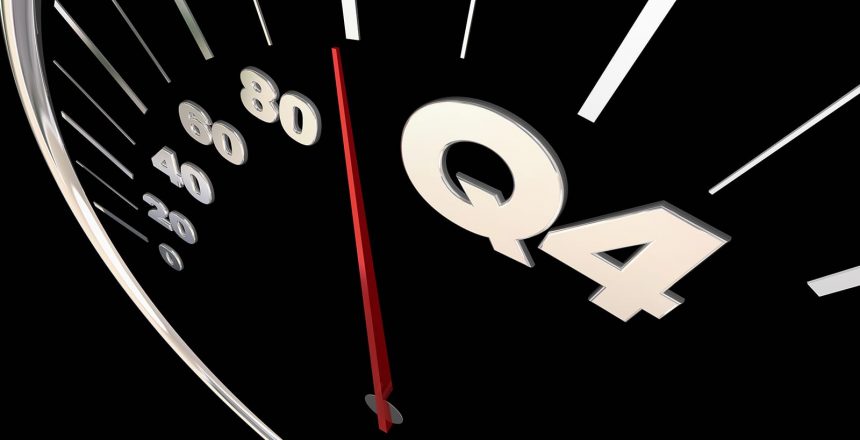 The 4th quarter of 2018 was one of the most painful quarters investors have seen in quite some time.  From December 3rd through December 23rd, we saw the DOW drop over 15% only to see Santa come a little early, with the DOW rebounding nearly 5% (over 1,000 points) on Christmas Eve. 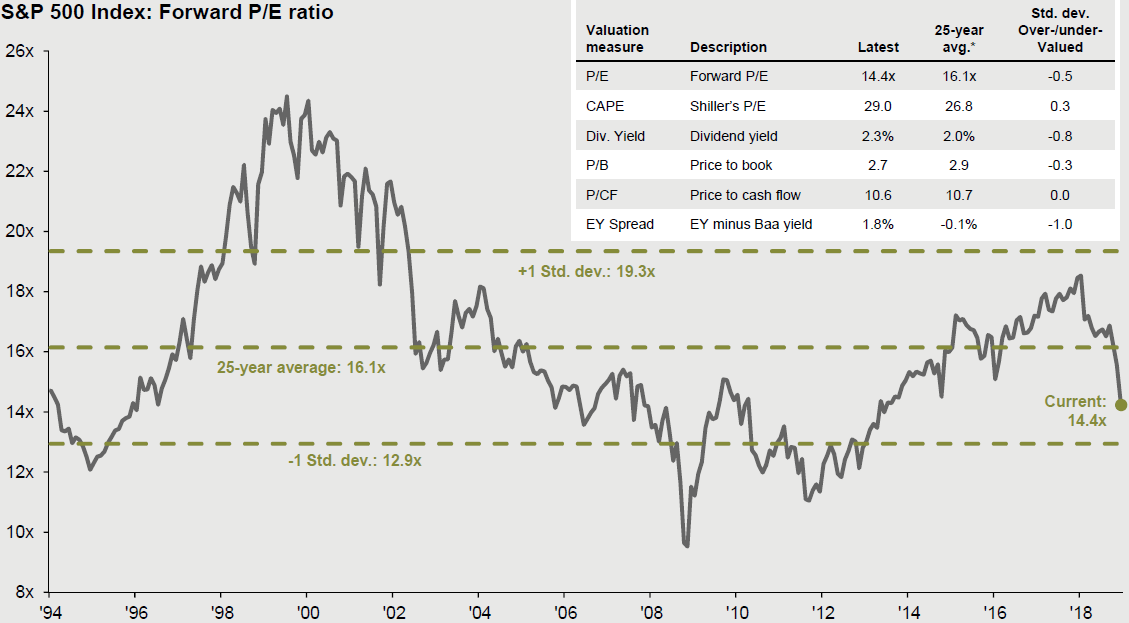 If we take a step back, it is important to understand the broader themes of 2018 and the road ahead. Growth accelerated in 2018, with real GDP growth reaching 3.0% year-over-year by the third quarter, reflecting a pick-up in inventories, government spending and fiscal stimulus through tax reform.  Market volatility in the fourth quarter brought equity valuations below their long-run averages, quelling fears that the equity market is overvalued. As seen in the chart above, current domestic stock valuations are now 10% below their 25-year averages.  This was not only due to the recent market correction, but also due to healthy corporate profits. In addition to equity valuations, the earnings yield on stocks is still higher than the yield on BAA corporate bonds, making stocks cheap relative to bonds.  Unemployment has reached a multi-decade low, and factors that limit labor force growth, such as retiring baby boomers and tighter immigration, should continue to push the unemployment rate down.  Almost 10 years of monetary stimulus, economic growth and falling unemployment have succeeded in boosting home prices, bond prices and stock prices. However, they have not had a meaningful impact on consumer prices. Although oil surged and then retreated in 2018, it should stabilize in 2019, sustaining the moderate inflation that we saw in 2018.

Domestic equities went through a rather uncomfortable stretch in Q4 of 2018, down -13.52% for the quarter, and finishing -4.38% for the year. For investors, the ride throughout 2018 was anything but smooth, as volatility continued as we predicted at the beginning of the year.  While volatility is not comfortable, it is necessary in achieving the long-term returns that investors desire.  After seeing valuations increase (as measured by the forward price-to-earnings ratio) to 16.8x in the third quarter, they began a downward trajectory, finishing at 14.4 for 2018.  The decrease in valuations reflects the turbulent market as mentioned in the opening paragraph, but also suggests there may be some buying opportunities for investors.

We believe it is important for investors to recognize that a low interest environment combined with a long bull market and a tightening Federal Reserve may dampen potential portfolio returns going forward. It is also important to note that with the U.S. and global economies growing and valuations down after Q4 2018, opportunities remain across the spectrum of global financial markets.  While the current bull market in equities is old, there is no set expiration date.

International returns were also negative in Q4 of 2018, with developed markets and emerging markets down -12.54% and -7.47% for the quarter respectively. The dollar strengthened in the third quarter of 2018, putting pressures on international returns for U.S. investors.  In addition to a strengthening dollar in 2018, we saw escalating trade concerns between the U.S. and China, raising investor concerns on its potential impact on global growth. 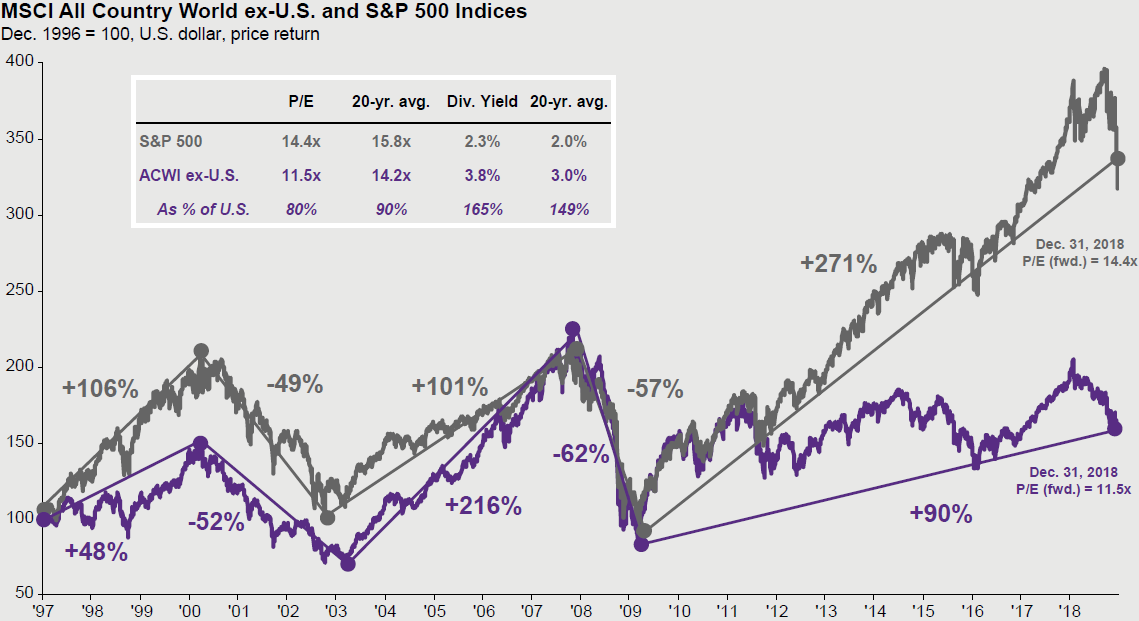 While 2018 was difficult for international equities, we continue to stand firm on our commitment to a diversified portfolio and are steadfast to our convictions regarding international investments. The chart to the left shows that a commitment to international stocks pays off in some market cycles, but not in others.  The most recent market cycle has not rewarded international investors, but valuations are continuing to look cheap in comparison to domestic markets.  We would expect a reversion to the mean in the future, which will reward those invested internationally. International equities remain attractive over the long run thanks to stronger economic growth and a downward trajectory for the U.S. dollar in 2019. Moreover, valuation measures suggest that international stocks are cheap relative to both the U.S. and their long-term averages.

Domestic bonds ended the fourth quarter of 2018 returning 1.64%. While nothing to write home about, domestic bonds did their job in 2018 and dampened portfolio volatility.  Prior to the volatility in Q4, it appeared that fixed income would end the year in negative territory due to the Federal Reserve increasing interest rates four times in 2018.  This has created headwinds in the fixed income space, creating flat returns for 2018.  We expect the federal reserve to continue to raise interest rates in 2019 due to the Fed’s long-term targets for unemployment and inflation being met.  Additionally, when looking at history, it is easy to see that the current Federal funds rate is anything but tight.  Barring any significant negative shocks, we anticipate the Fed to further raise rates by 0.25% twice in the first half of 2019.  The chart below outlines the historical federal funds rate, as well as the Fed’s expectations (blue), and the markets expectations (brown) for the future. 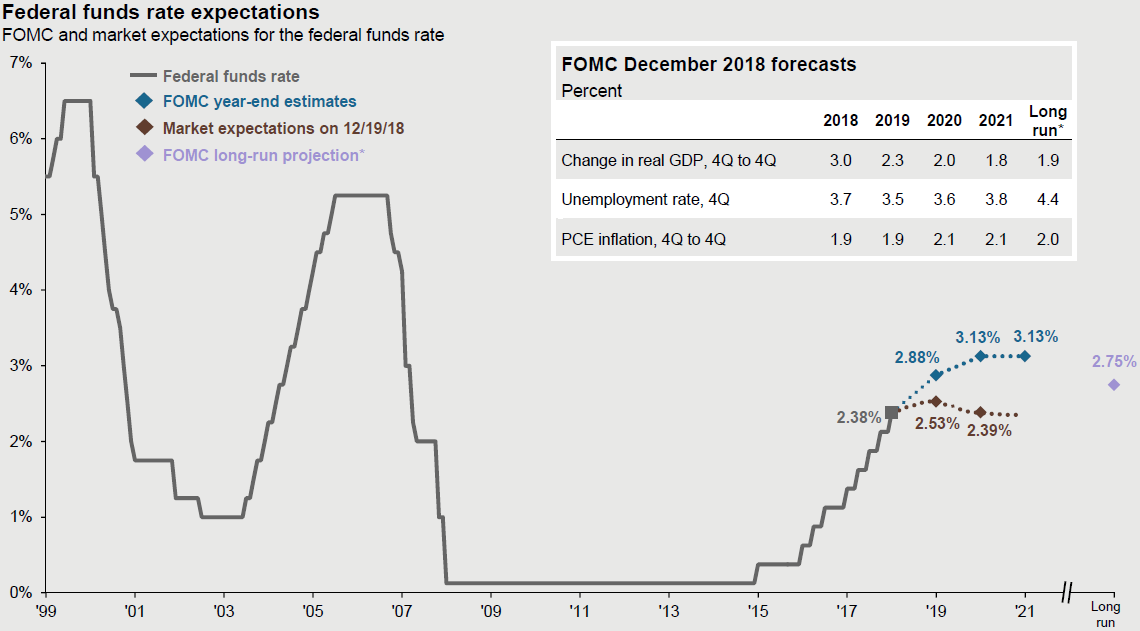 International fixed income saw a rebound in the Q4 and finished positive in 2018, returning 0.51%.  Outside of cash, International bonds were the best performing asset class in 2018.  The dollar continued to strengthen, seeing increased value as compared to other currencies. Additionally, the European Central Bank has stood by its outlined plans to end its bond buying program by the end of 2018. While this does not mean that they are entering a phase of monetary tightening, it does suggest an end to the “easy money” policies of the past. This in turn has dampened international bond returns as investors begin to prepare for an eventual tightening policy.

As we look ahead, 2019 growth is likely to slow without any new tax cuts or stimulus, reverting to the roughly 2% pace that the expansion has averaged between 2010 and 2016. Additional items that could impact growth in 2019 include changes to trade policies and the effects of the fading monetary stimulus from the Federal Reserve.

Despite the market volatility at the end of the year and the anticipated slowing growth ahead, equity markets and the economy still have room to run. Current valuations appear attractive in both the domestic and global markets, giving us confidence moving forward. While global growth is beginning to slow, economic conditions remain stable, with low unemployment, rising wages, and stable inflation.  Additionally, the recent drop in oil prices will lead to additional savings at the pump for the average consumer, creating additional discretionary income.  While the current conditions remain supportive to a continued expansion, there are several risks present that threaten to change this.  As we enter 2019, valid concerns are still present on future trade policies, slowing global growth, and increasing late cycle risks.

Overall, we are confident in our positioning and in our investment process, both of which allow us to look past periods of uncertainty and keep our focus where it should be, which is prudently managing our diversified portfolios to achieve solid long-term, risk adjusted returns.